Twenty years ago, Willi Noack graciously invited me to write the prologue of his book «Santa Cruz approaching its sustainable development in the 21st century«, which had a subtitle added with precision that mentioned: «… its main problems and root causes …».  It was a discussion document, where he described a series of situations and presented thoughtful analyses showing remarkable vision and perspective, based on a real and scientific diagnosis of Santa Cruz valid at that historical time in Bolivia.

Today, we meet again to make this presentation of “An Autobiography in digital format” (My Way -like Frank Sinatra’s song- as he likes to call it), in which he relates a kind of summary – a report on a «full life and a modern fairy tale”.

The illustrated cover of the book is full of question marks surrounding an arrow pointing clearly upwards, which undeniably marks the symbolism of his way, in a world of doubts and profound paradigm changes, where Willi proceeds firmly and with the strength of a true German «panzer» (tank).

This is not just any book or one more of those published, because it has all kinds of novelesque stories, anecdotes, comments, analyses, episodes in general with him as the protagonist or at least as a witness to them, some droll and others bordering on comedy, and I would say that they are part of the tragedy, reflected in the life of a character that seems imaginary, but is not, because he is real … truly real.

Willi recounts his childhood, marked by the early years when he experienced the harsh consequences of World War II, their evacuation. He even refers to the Marshall Plan which was vital for postwar Germany. Regarding his adolescence, he describes difficult times, the crisis and after high school, his years of university studies in Hamburg and the University of Cologne (Germany). He points out his first steps towards earning his own resources and the classes taught in a private school.

The book includes his marriage with Biggi (as many of us called her) and his children Phillip, Henne and Andy, the latter a true German Camba; his life in Santa Cruz and then in Riberalta, where he dreamed of a beautiful and visionary project: Tumichucua. It was there that I met him when, due to circumstances in life, I visited that beautiful Beni area, with all its fullness and beauty, pure Amazon, with magical places like Cachuela Esperanza.

After a rupture in life and Biggi’s departure to eternity, Willi’s strength is evident in how he faces his challenges and builds the new stage in his life with his marriage to María del Rosario Ardaya from San Ignacio de Velasco, that part of the territory of Santa Cruz that excells in natural beauty and has extraordinary people – typically cambas -, who win the hearts of locals and foreigners alike.

In the book, he portrays in a very pleasant and warm manner, his travels, his friends, his encounters; he delves into his trunk of memories and describes so many things that he calls them «miscellaneous», each of them with its own spark and his interesting descriptions that make reading a real pleasure.

I won’t extend this any further, and I invite the distinguished reader to enjoy this intellectual and heartfelt production, to explore this extraordinary autobiography of Willi Noack, as well as to savour a series of history lessons, some first hand, and delight in his anecdotes and travels, and also -why not? – remember specific events that left their mark on the political, social and economic agenda in Bolivia and in this world that is constantly transforming, in the way described by Heraclitus: everything flows, everything changes. 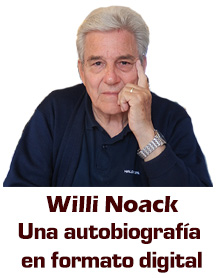 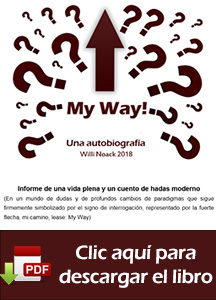 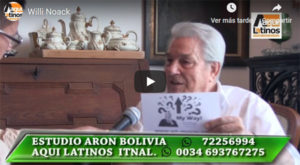